In early October of 2016, as the crisp, cool air and decaying leaves of fall descended upon Fort Bend County, every horror movie fanatic of every shape and size lined up for the grand opening of Richmond’s new movie theatre – Cinegore. It was slated to be a non-stop viewing experience of every horror movie ever produced. At first, it was a great success – all until a dark storm rolled through. Lightning struck the cinema with a roar, and a mysterious plasma poured from the screens like floodwaters. Cinegore was soon transformed into a multi-dimensional gateway of true horror. The monsters in the movies took life, and the audience became their victims. The carnage wrought that day was terrible beyond belief, and fields were filled with countless corpses of the dead.

Come get your tickets to Cinegore; a movie-going experience that takes on a whole new meaning. Will you make it out alive for the sequel? 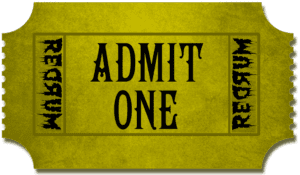